Eric Allen
Was born in Seattle and moved to Utah several years later. He currently shares an apartment with his younger brother in Murray where he spends the majority of his time writing stories to fulfil his dream of becoming a published writer. He also enjoys taking pictures of himself leering evilly at the camera.

One of my favorite TV series, Red Dwarf, a British sci-fi comedy, ended on a cliffhanger more than ten years ago.  The reason for this was that one of the actors went to prison for ten years for drug trafficking, two of the actors died (Kochanski and Hollie) , and one of the two creators/writers also died (Robert Grant).  Well, the one actor is out of jail, and the remaining creator/writer got all of the remaining actors back together for two more seasons of the show to wrap things up.  I've just discovered that Season 10 of Red Dwarf is already halfway through its run.  And how was that cliffhanger ending resolved, you ask?  Well, it's sort of a running gag in this season that it never was. They just picked up as if it never happened.

Why season 10 when the last season to air was season 8, you ask?  Well, there was a made for TV movie that takes place between Season 8 and season 10 called Back To Earth that was rather boring and lame and also didn't explain how the cliffhanger was resolved either.  Although, it did have a very entertaining end that spoofed Blade Runner quite badly.  This movie is considered by the creator to be season 9.
Posted by Eric Allen at 11:51 PM No comments:

I received my reviewers copy of A Memory of Light, the final book in The Wheel of Time Series today, a book I have been awaiting for the better part of my life... and I'm not allowed to say a single word about it until January 8th...  It's going to be a long three weeks.
Posted by Eric Allen at 8:05 PM No comments:

I Am Nobody Chapter 7 Draft 2

I've finished up the second draft of I Am Nobody Chapter 7, and you can find it at the bottom of this page.

This chapter didn't get many changes at all.  It was relatively well written.  It was mostly dialog, and I usually do pretty well with dialog the first time around.  One major change, though, was Mia's stated intent to find the Hunter before Death does as a point of pride.  This was something that the story needed so that her motivation is clear and obvious.  Now she has a reason to do pretty much everything she does for the rest of the book.  She's tired of being treated as worthless by Death, and very much wants to prove herself worthy.  That didn't really come out well in the first draft, so I added in a few small lines of dialog to add in the force of motivation for all of Mia's further actions.
Posted by Eric Allen at 1:28 AM No comments:

I Am Nobody Chapter 6 Draft 2

I've finished up the second draft of I Am Nobody Chapter 6, and you can find it at the bottom of this page.

The biggest changes in this chapter are in how things are worded, and in added descriptive elements that were lacking in the first draft. Also, something I was tipped off to by a female friend, is that Mia is probably going to be utterly terrified of being raped herself after having seen the aftermath of one, and so I've tried to add some elements of that to her character as well.  This is something I never really thought of, but now that I think about it, I was pretty stupid not to have.  I began in the last chapter, but its a lot more present here.
Posted by Eric Allen at 12:21 AM No comments:

I Am Nobody Chapter 5 Draft 2

'Tis the season to be disgruntled...

So, as you probably know, it's December.  I know, it creeps up on you fast, doesn't it?  It's the ninja of the months.  And December, if you were not aware, is the absolute worst month ever to work for the Post Office during.  All the extra mail from Christmas cards, stores sending out ads for their Christmas sales, and the packages.  Oh the packages. 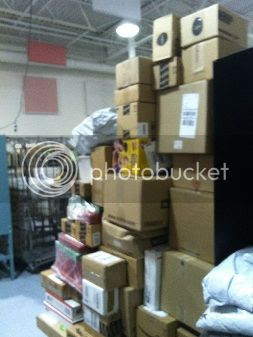 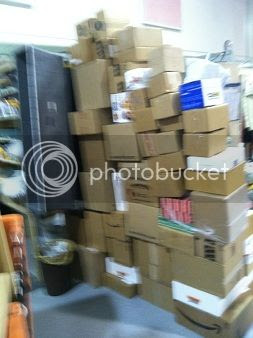 This leaning tower of packages that you see before you is eight feet high, six feet long, and three feet wide, and contains one hundred and seventy nine packages.  And keep in mind that my route is 2/3 the size of a normal route.  On any normal day, I'll have 20 tops.

Anywho, I've had a mountain of packages at LEAST that big every single day since Thanksgiving.  And THAT, my friends, is why it's been two weeks since I got around to editing another chapter of I Am Nobody.

I finally got myself a day off here, and so I took seven hours and worked on The Second Draft of Chapter 5 of I Am Nobody.

And, last of all, I finally broke down and, as a Christmas present to myself, upgraded from Microsoft Word '97 to Microsoft Word 2010, the latest version.  Therefore all further chapters will be posted in the 2010 format of .doc, which should be readable on any older versions of MS Word, and programs like Open Office etc, except for a few, minor formatting issues.
Posted by Eric Allen at 8:44 PM No comments: